Data just released by HUD show that homelessness among veterans has declined by nearly 50 percent since 2009. The decline in veteran homelessness reflects reductions both in the number of veterans staying in shelters (48%) and in the number found in unsheltered locations (52%). The Point-in-Time counts conducted in January 2019 found 37,085 veterans experiencing homelessness or 18 of every 10,000 veterans in the United States. 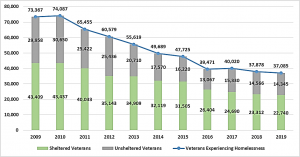 African-American and Native American Veterans are at Particularly High Risk of Experiencing Homelessness*
More than half of Veterans experiencing homelessness were white (58%). At the same time, veterans of color were considerably overrepresented among the homeless population compared to their share of all veterans. African Americans, for example, accounted for 33 percent of the homeless veteran population but only 12 percent of all U.S. veterans. American Indians accounted for less than one percent of all veterans but 3 percent of homeless veterans. All people who serve in the military are promised the same benefits after service, but this does not protect veterans of color from the poverty and discrimination that can make their access to stable housing and family supports fragile during the months and years after they have served their country.

The Drop in Veteran Homelessness Reflects Recent Investments of Resources to Address the Problem
The halving of veteran homelessness in the last ten years reflects a targeted investment of resources for this population, and housing assistance in particular. Two relatively well-funded programs have focused on moving veterans out of the homeless system and into permanent housing.

These programs have been critical to reducing the number of veterans experiencing homelessness. However, communities should examine the role these and other programs may play in also reducing the existing racial disparities in the homeless veteran population. The Department of Housing and Urban Development recently released a racial disparities tool that CoCs can use to examine whether racial and ethnic biases exist in their homeless service systems.

*Demographic and geographic information based on 2018 point-in-time data. These data will be updated once they are released by the Department of Housing and Urban Development.